DUBAI, United Arab Emirates, Nov. 15, 2017 /PRNewswire/ — GAC Motor, China’s leading automaker, showcased its signature vehicle models in the prestigious Dubai International Motor Show on November 14. Models including the GS7, the GS3, the GS8, the GA8, the GS4, and its first all-electric SUV the GE3, have been exhibited at the World Trade Center. 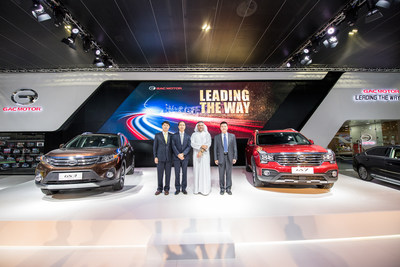 Mr. Lei Jin, Commercial Counselor from Economic and Commercial Section Consulate General of the People’s Republic of China in Dubai; Shehab Gargash, CEO of Gargash Enterprises; and Mr. Wendi Xia, General manager of Sinomach Automobile, participated in the event and launched the GS7 and the GS3 in the Middle East.

“We are thrilled to be back to Dubai Auto Show again with our ground-breaking lineup,” said Yu Jun, president of GAC Motor. “Middle East has been a strategic market place for GAC Motor to achieve global outreach as an international automaker that excels in research, manufacturing and sales. We believe the models we bring to the auto show can satisfy the needs of a wide range of consumers in the segmented mid to high-end market.” 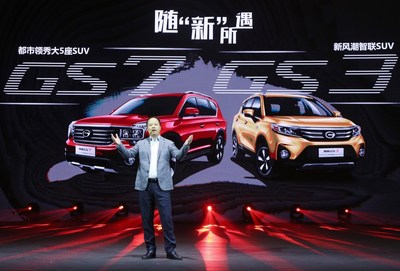 GAC Motor’s models have completed a series of road trip tests against tough weather and environment. Middle Eastern customers will get uncompromising driving experience even in summer, when temperature can rise up to 50°C.

Developed on GAC Motor’s G-CPMA (Cross-Platform Modular Architecture) platform, the GS7 is a mid-sized SUV designed for consumers who want a fashionable and carefree driving experience. It made its debut at the 2017 North American International Auto Show (NAIAS) in January and was praised as “A New Generation Blockbuster SUV” by The New York Times and as an “Impressive Worldwide Debut” by Forbes at NAIAS. It is powered by the brand new GAC G-series 320T engine that offers a maximum power of 148kW (201.28 horsepower) at 1,750 RPM and peak torque of 320Nm. 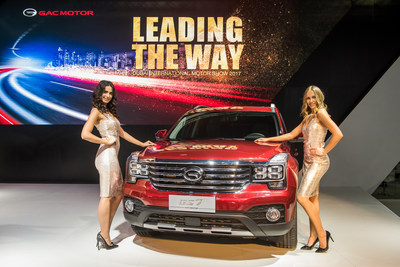 The GS3, with its trendy and sporty design, comfortable cabin, smart technology and engaging driving experience, is a sporty model built for young families.  It is also equipped with smart technologies, including human-auto interaction, Carlife smartphone intelligent interconnection feature and a 3-D voice navigation system. It carries GAC Motor’s second-generation 200T engine that offers peak torque of 202Nm at 1,500RPM.

In addition, the company’s self-developed high-end SUV the GS8 meets the North American SUV roof anti-force standard and redefines the high-end SUV market. It is equipped with i-4WD, the on-demand four-wheel drive system to ensure a comfortable and safe driving experience.

To better understand the local market and regional insights, GAC Motor has formed partnership with the Dubai-based car dealer Gargash Motors to deliver integrated, innovative and better service and solutions to local customers. Shehab Gargash noted that the cooperation between the two companies would be further strengthened.

GAC Motor has started its global market strategy in Dubai since 2014 with an initial emphasis on the Middle East market. Middle East has been a strategic market place for GAC Motor to achieve global outreach as an international automaker that excels in research, manufacturing and sales. Since then, it has established mature sales channels in seven countries and regions across the Middle East, especially in Bahrain and Qatar, where GAC Motor has become the No. 1 Chinese automobile brand.

“In the future, GAC Motor will continue to offer automotive experience with enhanced vitality and creativity to its global customers, by carrying forward the brand philosophy of ‘innovation, quality and pleasure’ and embracing cutting-edge technologies,” Yu said.

Founded in 2008, Guangzhou Automobile Group Motor CO., LTD (GAC Motor) is a subsidiary of GAC Group that develops and manufactures premium quality vehicles, engines, components and auto accessories, achieving a year-to-year growth rate of 96 percent in 2016, the highest among all Chinese brands in the corresponding period. GAC Motor now ranks the highest among all Chinese brands for five consecutive years in 2017 China Initial Quality StudySM (IQS). The company aims to form a production capacity of 500,000 vehicles by 2017 and of 1,000,000 vehicles by 2020.

ADFD rounds up 2020 with project allocations worth over AED622 million